In a digital age and a context of shrinking resources, libraries face increasing challenges. But, public libraries play many roles among our communities. 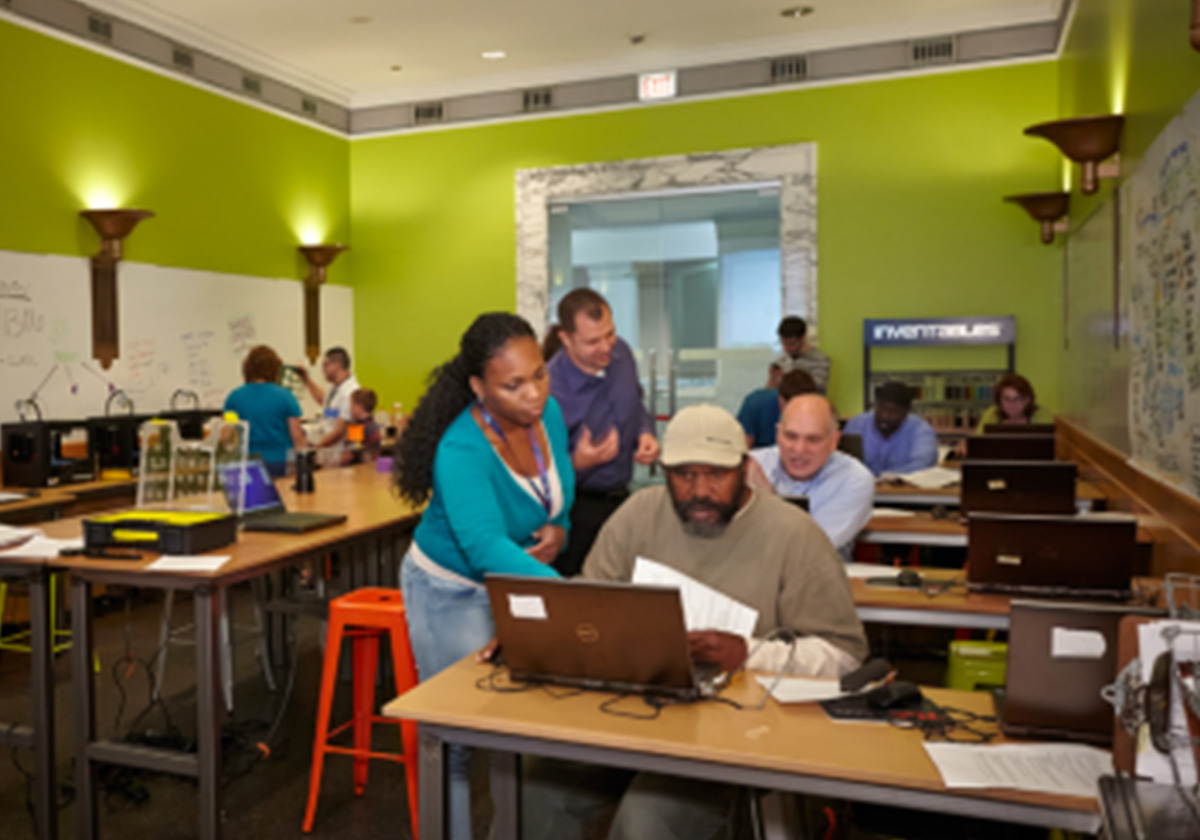 In the Uk, 324 libraries have been closed since 2011 due to cuts in public spendings. In Copenhagen, a controversial decision forces libraries to discard one third of their collection . Such examples are legions. In a digital age and in a context of shrinking resources, libraries face indeed increasing challenges. Are they still relevant today? Yes, answers Arup in a recently released report about the future of libraries . In this study, the design consultancy confirms several trends pointing towards a renaissance of these public institutions. This comeback requires however significant changes: the future of libraries, it seems, has little to do with (traditional) books.

Beyond the reinvention of an institution that has existed since the antiquity, discussing the future of public libraries also allows us to explore some leading trends in contemporary societies: disruption caused by digital technologies, the importance of access to knowledge, the evolution of public services, the emergence of multi-functional places, etc. While the role of the library 20 years from now is still a mystery, their current renewal tells a lot about our time.

Public libraries play a crucial role for the most vulnerable city-dwellers for whom access to culture and to the Internet may be very limited. In Paris, 800 computers are thus for example freely available to the public and several libraries provide digital training. Yet, in order to be accessible to all, public libraries´ resources have sometimes to be carried out of the buildings themselves. Port'âge is a French initiative, where volunteers bring libraries´materials directly to people who have difficulties to move. In an other context, Libraries Without Borders, has developed The Ideas Box , with the aim to reach people in refugee camps and poor countries, but it could also be used when the idea of a mobile library is considered. 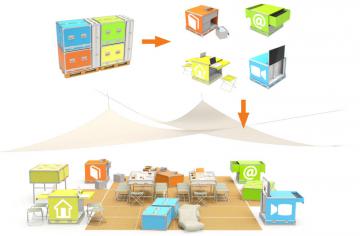 Access to all requires a high level of flexibility and the capacity to adapt to very different needs. Launched in 2010 in Denmark, the program "open libraries" is in tune with this goal. Though not deployed in all of the country's libraries, it allows individuals to lock themselves into those buildings after opening hours, thanks to their ID cards or by using access codes. This high level of flexibility contributes to accommodating the demands and aspirations of very diverse users. It raises of course questions about security and care for the place and its resources, but people who have been following the program up til now report only very few incidents. By trusting people in their use of the place, the "open library" program contributes maybe to making people feel responsible for this common good.

with his social security card after opening hours 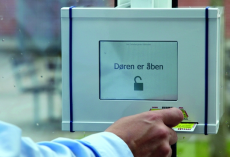 More and more workers are location-independent and need new spaces and amenities to work. The growing number of alternative workplaces such as co-working offices confirms this trend. Their success can partly be explained by the ability they provide users to connect with others, hereby contributing to developing new ideas or projects. As stated in Arup's report " in the emerging knowledge economy, new value is created in highly collaborative environments by using immediately digestible information ".

Open to all, with free wi-fi connection, direct access to knowledge, potentially with a coffee shop... libraries are obvious alternative workplaces. They could however further develop their role as spaces for collaborative work and nomadic workers. This is the goal of the James B. Hunt Jr. Library, in North Carolina, which opened in 2013, with the aim of becoming " the best learning and collaborative space in the country ". This implies more space given to communication rather than storing books. The libraries´ 1.5 million books are indeed in on-site storage, where they occupy one-ninth of the place they traditionally do. Though not directly visible, the volumes can be delivered to users within 5 minutes thanks to the library's bookBot . 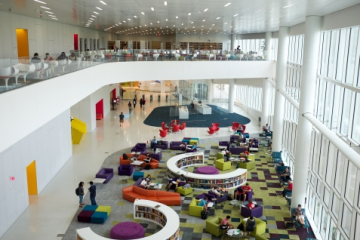 Even though access to information is easier than ever, data overload, where the enormous amount of information can be overwhelming, is however a challenge. In this context, librarians may have a critical role to play to curate information and facilitate its usability for individuals, by providing relevant knowledge.

Public libraries as learning centers: the role of maker spaces

Gone are the days of the mere book-reading experience in the neighbourhood library . Activities that libraries host are becoming more and more diverse and they offer varied ways to interact with information and acquire new knowledge. More and more of them have workshops with several machines, equipments and courses dedicated to specific crafts (sewing, ceramics, cooking, etc.). In Arizona (United States), the Hillary Rodham Clinton Children's Library offers for example a teaching kitchen, greenhouse, a vegetable garden and an arboretum where children can cultivate, prepare meals and sell their products in a planned farmer's market.

There are also many examples of public libraries offering access to cutting-edge technologies, such as 3D printers. Through those initiatives, libraries show they can be places to apply knowledge and transform ideas into concrete solutions. They also raise questions about competencies and know-how to acquire in the 21st century . If, according to the French sociologist M. Lallement, maker spaces tell us a lot about the future of work , one can argue that libraries are also relevant places to spot those evolutions. 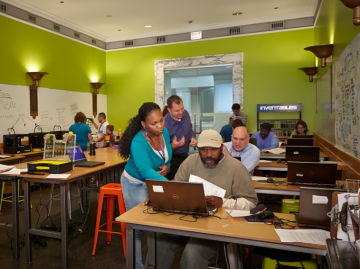 Several studies have been published recently assessing and measuring the diverse positive impacts of libraries. In a report published in 2014 , the Danish think-tank Fremtidens Biblioteker (Libraries of the Future) thus highlights three categories of contributions - cultural and social contributions, educational contributions, contributions to digitalisation - and evaluate their economic effects.

While such analysis can make the case for libraries, they will however not always be enough to gather means to acquire a state of the art e-books' collection, offer free access to cutting-edge technology, propose accessible and well-designed reading and work environments, etc. In many instances, new economic models need to be found. Public-private partnerships often appear as a solution and there are several examples of philanthropic organisations supporting public libraries.

Participatory funding can also benefit libraries. Between 2013 and 2014, Kickstarter said that more than 150 library-related projects had been funded through the platform (read more in Arup's report pp.17 ). However, while those projects are predominantly initiated and funded by citizens, some cities have started using crowdfunding through investing in "match funding schemes". Concretely, it means that cities will fund projects if a part of it can be raised through crowdfunding. Such a model could be investigated for local public libraries and could contribute to strengthening a feeling of local ownership. 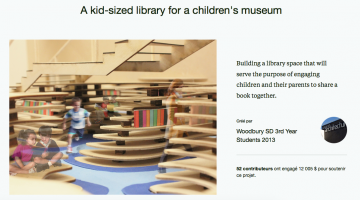 Third place is a concept dated back from 1989 but who has proven very relevant to describe a contemporary need for users to access places where they could hold different activities - working, meeting with friends, buying everyday goods, printing a document, etc. -. The intensity of uses that those places allow gives them the potential to be dynamic local hubs and, in some instances, local centers for creativity and innovation. Municipalities appear to be very interested in such places and many of them try to start a "third place" in their territory... from scratch.

We would like to argue here that libraries have the potential to be such places, when they not already are. Instead of necessarily creating new third places, municipalities could try and see how they could involve users, and the community at large, to experiment with ideas and creative spaces so that public libraries could become local dynamic hubs, with access to knowledge, the possibility to connect with others and potentially develop new skills.

That is not to say that all libraries should provide all services. And indeed, one can only be inspired by the current trend one can see in Paris where public libraries have started to specialise themselves , according to themes for example. This phenomenon could be taken a step further, with libraries specialising in different services, based on local needs. The challenge will then be to create a network of all those places, making their specificities visible.