To answer to the rising need for working facilities in China, the government promotes makerspaces and workspaces all over the country. 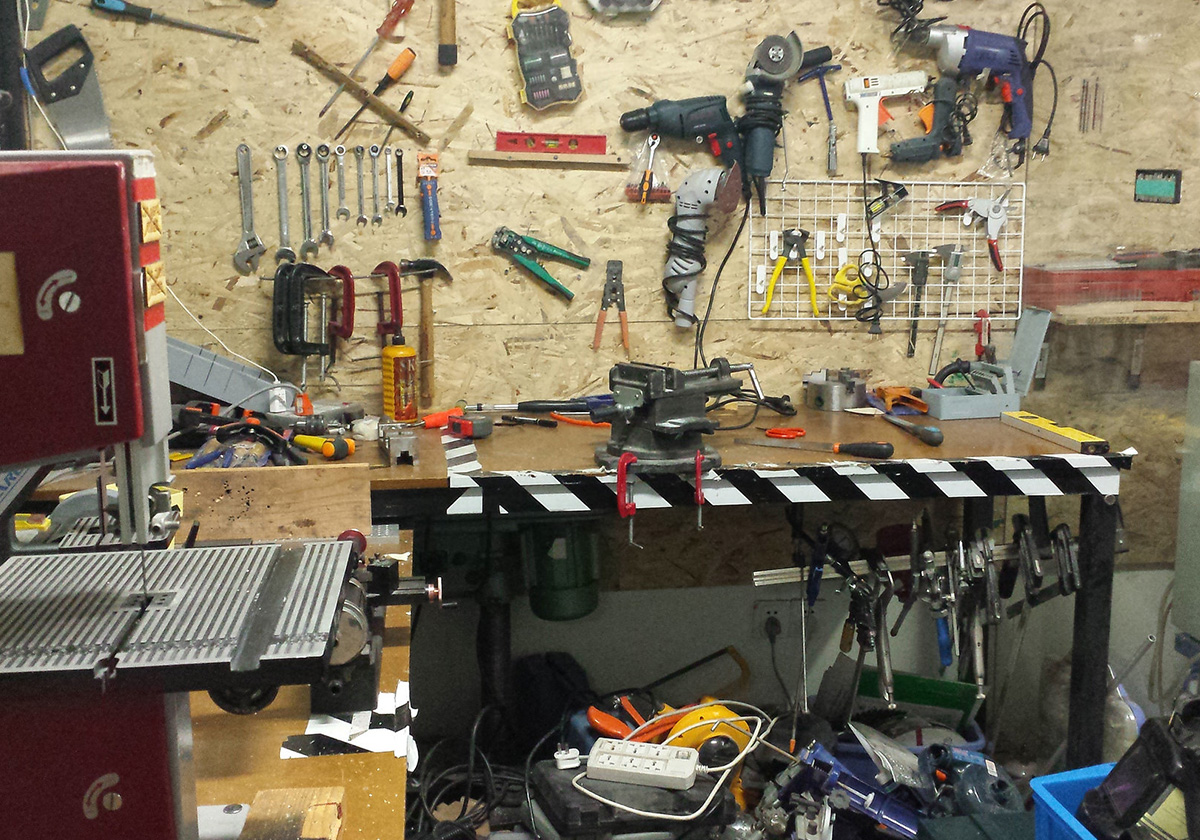 As Chinese government promotes 2,300 makerspaces in China, the British Council (BC) counts only around 100 spaces by the end of 2015. Why this difference? The British Council leans on the definition of "an open-access space (free or paid), with facilities for different practices, where anyone can come and make something". It does not take into account the plentiful spaces that do not provide access to tools but that are called makerspaces to get governmental subsidies. Most of the time, they are incubators or accelerators ; they offer a support for entrepreneurs to set up their companies.

This post establishes a picture of makers movement in China thanks to the BC report , the visit of XinCheJian space and an interview with Hans Stam, a Chinese makerspaces specialist. A first post about coworking in China was published two weeks ago.

Key figures of makerspaces in China

The BC report shows that as in western countries, Chinese makerspaces are an urban phenomenon and especially on the east coast cities (Beijing, Shenzhen, Shanghai, etc.). Members are mainly schoolchildren, students, highly-educated and men. Only a few makerspaces focus on craft ; most of them are specializing in electronics as many electronic companies deliver a lot of products to makerspaces in order to design new furnitures. 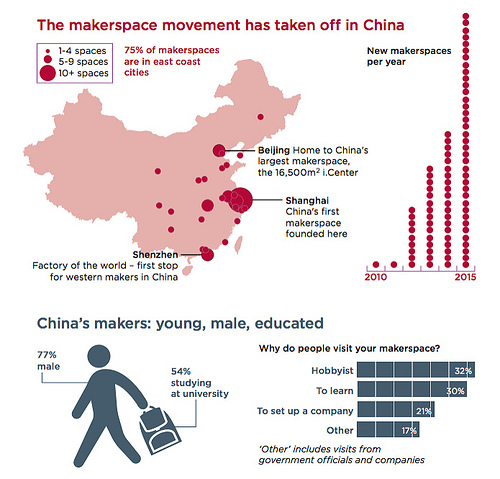 Nesta & British Council - Made in China: makerspaces and the search for mass innovation

Even if the government wants people to create businesses, only 21% of people are members of one makerspace "to set up a company". The main reasons are because "it's their hobby" (32%) and because they want "to learn" (30%). Yet 38% of makerspaces have already commercialised products and 73% of them have a link with manufacturing. It is to be noted that hobbies and leisure time are new in China and particularly for adults. This explains why makerspaces have difficulties recruiting members.

Makerspaces perceive a support from different stakeholders: 56% from individuals (membership fees), 23% from local governments, 13.5% from informal groups (donations), 5% from universities and 2.5% from schools. 52% of makerspaces managers highlight the complexity to built a sustainable business model without backing.

Makerspaces also need to meet some requirements to obtain governmental subsidies. For example, the area size must be between 1,000 and 10,000 square meters in the city of Hunan but the BC measures an average of 500 square meters per makerspace. Other cities ask makerspaces to have a certain amount of money in a bank account, unreachable for many founders. Last but not least, subsidies are most of the time only available for makerspaces that are focused on business.

The close link between makerspaces and education

As the government wants to achieve an economic shift from a labour market to an 'innovation and design' market, the most interesting part of maker movement in China is probably the "maker education". The BC identified two kinds of makerspaces focused on education, the ones for kids and the ones for students.

As an example, the i.center makerspace was created in 2013 for students of the Tsinghua University in Beijing. With an area of 16,500 square meters, it offers weekly hacking workshops to students. Another famous example is Litchee Lab , a makerspace in Shenzhen dedicated to children and focused on the experimentation of creativity. At least 16 schools had developed their own makerspace at the end of 2014.

For Chinese companies, required skills change from one decade to another. The BC says: "In the 1970's, the skills it needed were those associated with low-cost labour, for example the ability to follow instructions. Later on, (...) China's education system became adept at producing graduates with a strong grasp of the fundamentals of science and engineering". Makerspaces advance to the next level of a service market which requires new skills such as creativity and freedom of thought. Waiting for these future creative workers, some companies, as the Research Institute of the China Electronics Technology Group, integrate people educated in a three-months maker program.

XinCheJian ("new workshop" in English), the first Chinese makerspace since 2010, gathers people who share tools and knowledges to create new objects and software by distorting the old ones. This explains why XinCheJian is also called hackerspace, even if, obviously, the members are not politically active. In 2010 all members were foreigners, now half of them are Chinese. Members create simulators more than products, as one helicopter flight simulator (see picture below). For the founders of this space, XinCheJian is like a Shanghaian garage where people play and do DIY after work or class. Based on the UK model of makerspaces, they withstand the business objective pursued in most of Chinese makerspaces: they focus on leisure and passion. 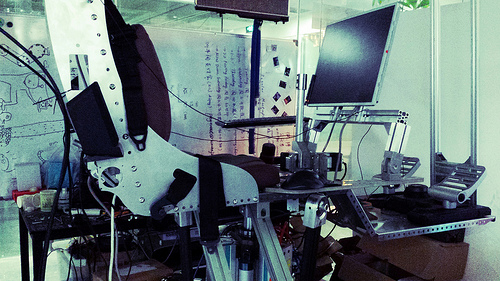 With an area of 280 square meters, this non-profit organization is part of the famous coworking space People Squared. XinCheJian pays a very low rent as it provides a famous brand to People Squared and specific tools to coworkers. Actually, other coworking spaces tried to attract it.

On average, XinCheJian has 120 members per month (5,000 people since the opening of the space). The membership costs 100 RMB per month (13.5 euros) or 450 RMB for six months (60.6 euros). XinCheJian offers programming lessons for children from 3 to 7 years old by using a car game. It provides a large range of tools as a 3D printer or a milling machine.

Even if this makerspace does not aim to sell new products or to build new companies at any prize, some inventions succeed. For instance, the electric skateboard STARY perceived 742,000 dollars of crowdfunding moneys on Kickstarter platform . The inventor only asked for 100,000 dollars.

As in western countries, the founders of XinCheJian insisted on the freedom of their members. They do not pursue a business dream. This original vision of makerspaces is a challenge in China where spaces owners definitely want their members to set up companies and to make money. Actually XinCheJian proves that the maker movement could do with implementing the freedom principle as, anyway, some inventions conquer a market. 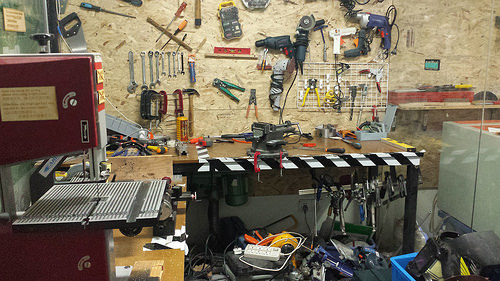